We contribute to Kazakhstan and its economy by creating jobs, paying taxes, using local suppliers and investing in community infrastructure.

KAZ Minerals is committed to promoting community development and maintaining lines of communication with communities near its operations and potential new projects. The operations’ General Directors have overall responsibility for community relations in their respective areas. 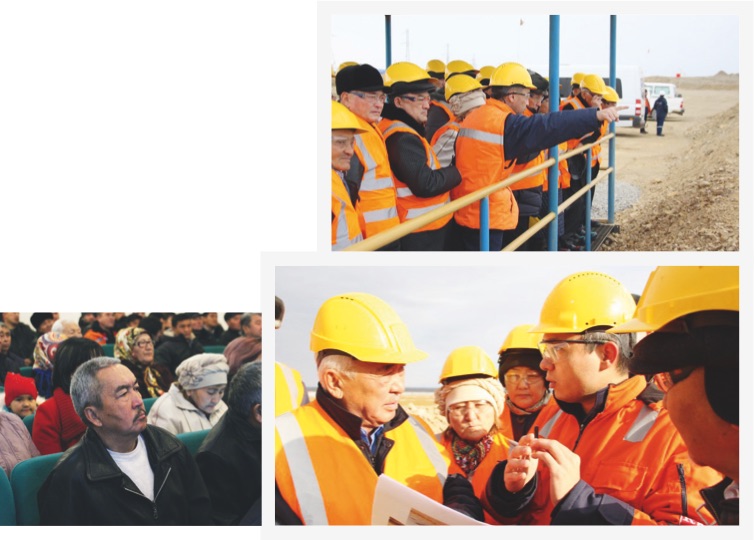 KAZ Minerals is committed to consulting regularly with communities close to its operations. Formal meetings take place around licencing of new project developments. Other consultations are held to discuss local development initiatives or social projects which the Group may support.

In December 2017 a group of community representatives from the nearby villages of Aktogay and Kopa were hosted at the Aktogay mine site. “During the visit we visited the tailings storage area and saw that birds are nesting on the site. The site is generally very clean and tidy. We were shown how geomembranes are used to prevent leach solution from seeping into the local environment. I really liked it. Our guides showed us everything and answered all of our questions.” Nursha Balabekova, former chemistry teacher and local resident.

The Group’s commitment to respecting the rights of indigenous peoples and its approach to resettlement are contained in its Human Rights Policy. The areas in which the Group has operated or developed new mining projects historically have been sparsely populated and resettlement of indigenous populations has not been necessary. It is unlikely that future projects will require resettlement, but the Group will always seek to avoid involuntary resettlement. KAZ Minerals is committed to the protection of culturally sensitive areas.

Under the terms of subsoil use law in Kazakhstan, the Group is required to give preference to Kazakhstan nationals during the performance of subsoil use operations and to invest in the training of local workers.

KAZ Minerals supports communities in Kazakhstan and Kyrgyzstan by investing in projects that benefit society close to its operations as well as national projects. Social investment payments of $9 million were made during 2018, including support for the refurbishment of the Irtysh river embankment in Pavlodar, the construction of botanical gardens in Astana and the purchase of medical equipment in the East Region

The Group has a social investment policy and monitors projects that are funded to ensure they meet the aims and objectives of the Group. The types of projects the Group seeks to support are: (i) projects local to the Group’s operations in the areas of healthcare, education, infrastructure and sport; (ii) national projects in the Group’s countries of operation also in the areas of healthcare, education, infrastructure, culture and sport; and (iii) projects to promote the culture and economic profile of the Group’s countries of operation.

As required by subsoil use law, the Group also prioritises local procurement to assist diverse economic growth within Kazakhstan. During 2018, the level of procurement from outside Kazakhstan has been higher than in the past mainly due to the requirements of the major growth projects at Bozshakol and Aktogay, which employ modern technology that is only possible to source internationally. In the East Region local procurement was 65% of total spending (2017: 77%).

KAZ Minerals supports sport through social projects close to our mining operations, contributing to the construction of sports facilities for the benefit of local communities.

In 2018, the Group participated in the construction of a new olympic swimming pool complex in Pavlodar, close to Bozshakol.

‘‘I can proudly say that we now have a facility that meets olympic standards and the highest profile athletes can train here. I am so grateful for this excellent facility, it is certain to show results in national and international competitions.’’ Director of Water Sports Federation, Pavlodar region

We are dedicated to maintaining the highest standards of corporate governance