Role of the board

The role of the Board of Directors

The Board is accountable to shareholders for managing the Company in a way which promotes its success. It ensures that there is a complementary balance in strategy between promoting long-term growth and delivering short-term objectives, with due regard to risk.

The Board is primarily responsible for strategic direction and leadership, evaluating and managing risk and ensuring internal controls are in place. Its overriding duties are to run the Company as stewards for the Company’s stakeholders, with good governance, strong values and a safety-driven and ethical culture.

There is a formal schedule of matters specifically reserved for the Board’s decision which is reviewed regularly and which is set out below. These are matters that are significant to the Group as a whole because of their potential strategic, financial and reputational implications and impact on stakeholders. The Board currently has five Committees to deal with specific aspects of the Group’s affairs. The Chair of each Committee provides reports to the Board on the matters discussed at each Committee meeting to ensure that all Directors have visibility of and the opportunity to discuss the matters being considered by each Committee.

THE ROLE OF THE CHAIR

In addition to being a Board member accountable to the Company, the shareholders and other stakeholders, the key roles and responsibilities of the Chair include:

THE ROLE OF THE CHIEF EXECUTIVE officer

In addition to being a Board member accountable to the Company, shareholders and other stakeholders, the key roles and responsibilities of the Chief Executive Officer include:

THE ROLE OF THE DEPUTY CHAIR AND SENIOR INDEPENDENT DIRECTOR

In addition to being a Board member accountable to the Company, shareholders and other stakeholders, the key roles and responsibilities of the Senior Independent Director include:

THE ROLE OF independent non-executive Directors

CHANGES TO THE BOARD WITH EFFECT FROM 1 JANUARY 2018

In April 2017, the Company announced changes to the structure of the Board following the previous Chair, Simon Heale, informing the Company of his intention to step down from the Board after 11 years. It was the Board’s view, after careful consideration, that Oleg Novachuk, at the time Chief Executive Officer of the Company, was uniquely qualified to succeed Simon as Chair, to lead the Board and hold specific responsibility for strategy, government relations and business development. His knowledge, experience and relationships made him uniquely qualified for the role. Prior to the announcement in April 2017, in compliance with the UK Corporate Governance Code, we consulted our major institutional investors on this appointment and Oleg Novachuk became Chair on 1 January 2018.

As part of the changes described above, the Board, with the aim of maintaining the Group’s high standards of governance, appointed the Senior Independent Director, Michael Lynch-Bell, as Deputy Chair with effect from 1 January 2018. The Deputy Chair role expands the authority and responsibilities of the Senior Independent Director, leading on Board governance matters, including the annual review of Board effectiveness, the leadership of the Nomination Committee and acting as an intermediary between non-executive Directors and the Chair. The Deputy Chair role also provides a point of contact between the Company and independent shareholders, who may wish to raise issues with the Board other than through the Chair.

The Board has been strengthened by the appointment of Alison Baker on 9 October 2017 as an independent non-executive Director. A review of the membership of the Committees was conducted in conjunction with the changes to the Board structure and as a result, Michael Lynch-Bell was appointed Chair of the Nomination Committee and became a member of the Health Safety and Environment Committee and Alison Baker joined the Audit and Nomination Committees. Alison will succeed Michael as Audit Committee Chair during 2018. The scope of the roles and responsibilities of the Directors has been thoroughly reviewed and adapted to ensure that they are well-defined and that the division of responsibilities between the Chair, Chief Executive Officer and Deputy Chair are clear.

matters reserved for the board

KAZ Minerals is committed to protecting the interests of its employees, customers, investors, local communities and the environment. As part of this, the Board maintains five committees, which focus on particular areas: 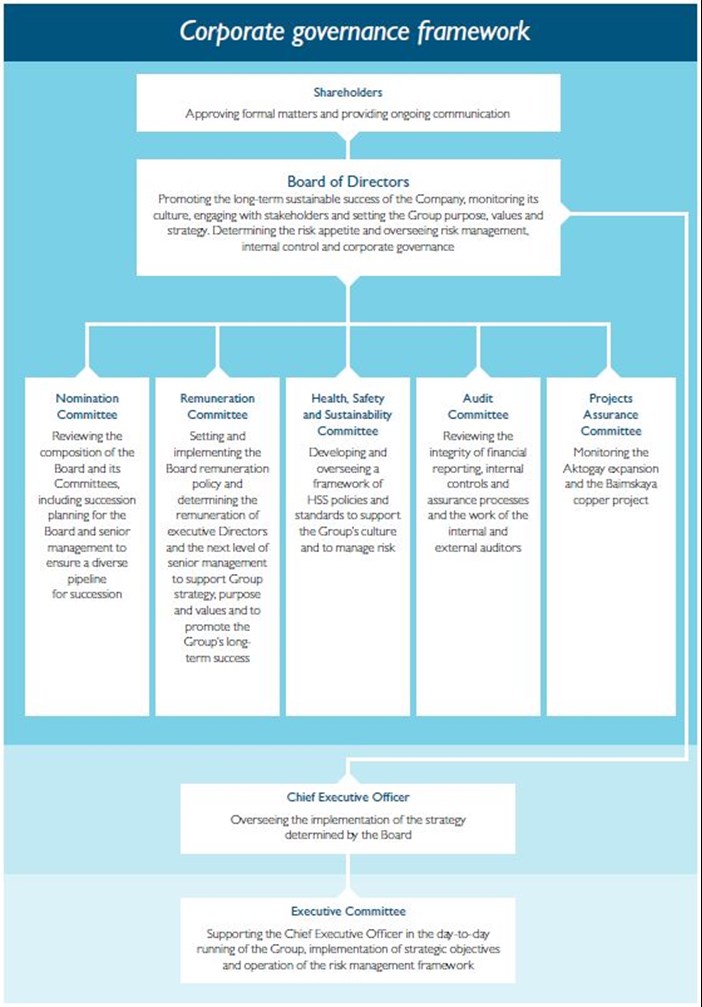 Expand all Close all

The Committee's roles and responsibilities include:

The Health, Safety and Environment Committee is mainly responsible for keeping under review the development and maintenance of a framework of policies and standards which are used to assess, manage and where possible prevent health, safety and environmental risks. Reports on the Committee's reviews are then provided to the Board.

The Committee’s key roles and responsibilities include:

Until October 2018, the Committee was primarily responsible for reviewing and providing assurance to the Board on the ramp up of operations at Bozshakol and Aktogay. In October 2018, due to the operations at Bozshakol and Aktogay being close to achieving design capacity and the ramp up phase being complete, it was decided the Committee would be succeeded by a re-established Projects Assurance Committee.

The Projects Assurance Committee was re-established in October 2018 at which point the Committee assumed primary responsibility for overseeing the Aktogay expansion and the Baimskaya project and for continuing to monitor systems and processes at Bozshakol and Aktogay.

Ensuring the effectiveness of the Board

The Nomination Committee is primarily responsible for leading the process for Board and committee appointments and for keeping under review the balance of skills, experience, independence, knowledge and general diversity on the Board to ensure the balance and composition of the Board and its Committees remain appropriate.

The Committee’s key roles and responsibilities include:

The Committee’s principal roles and responsibilities include: